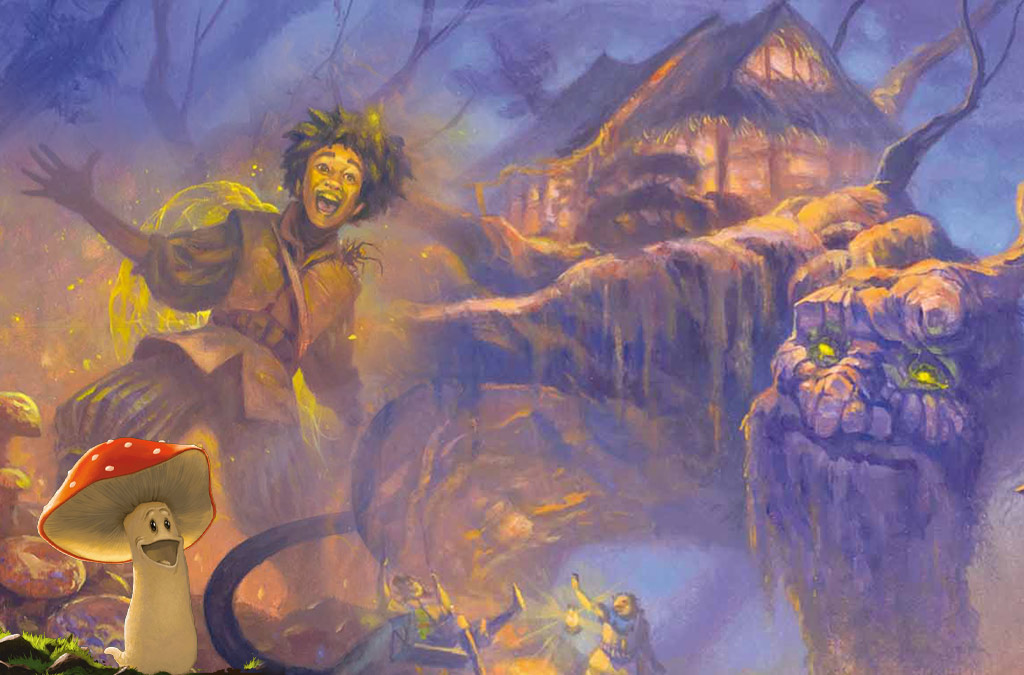 Adventures journey northward through the forest in search of Little Oak, Will of the Wild and The Get Away Gang. Juniper follows along, with the encouragement of rations and goodberries.

Along the way they hear a crowd of voices yelling insults at them and the party circles around it.

Along the way they need to cross some rivers. Marlie tries to investigate a lake but something magical keeps her from getting closer than 10 feet of the shore.

They continue north with Zreith leading the way he walks straight into a clearing with singing mushrooms. He tries to join in the song but doesn’t immediately win them over with his out of tune squawking. Mary Hopping bounces in joins to the song and adds to it with a wonderful performance. The mushrooms are happy and they sing a few tunes together. The rest of the party reluctantly investigates the scene while Juniper loses interest and wanders back into the forest.

Mary makes friends with one the singing mushrooms and Shroomy crawls onto her shoulder with the intent of spreading song and joy throughout the land. The rest of the party piece together that this ring of mushrooms is some sort of teleportation ring. The mushroom folk offer some clues and warnings – you can sing the song to make it work, but you’ll never come back. Zreith immediately starts the song and running in a circle to activate the ring. Ember tries to tackle him and fails, Mary tries to stop him with a spell but Zreith avoids it. The others are too concerned about being teleported away and step away from the mushroom circle. In an explosion of glitter, Zreith vanishes.

The rest of the party decide that they must continue without their feathered friend and restart the journey, losing one friend, but gaining another.

Back in the forest, Juniper darts forward on a hunt. The party lets Juniper hunt and they hear what sounds like goats screaming. Moments later Juniper comes running back wounded with large cuts across her torso. Angry voices and stomping feet approach. Ember casts Pass with Trace on her group and they make a quick escape.

A few hours later, the group makes it to a large talking tree with a treehouse in it’s branches. They meet Will of the Wild and the Getaway Gang. Bobbi, a dwarf recognizes Marlie, Mary and Poppy and is very excited about seeing Juniper. Poppy and Will are instantly drawn to each other.