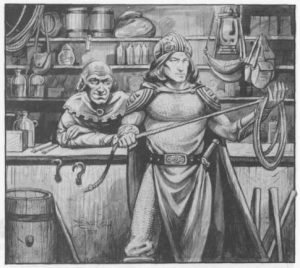 Adventurers are employed to work at at noble’s house – to assist with a 10-day party. Kruxin is put in charge of guarding an entry gate, while Kayla mingles with the guests, working as undercover security. Behind the scenes, in the kitchen, Ryla manages the busy kitchen operations. On the first day, Charlie put on a great performance, and has gained a little fan following in Mulmaster. A halfling named Saul, supervises everyone.

Kruxin, is greeted by a fellow half-orc named Chroomeg. Chroomeg decides to hire Kruxin and his companions to investigate the vandalism on his tavern. At night, the adventurers secretly wait inside the Ox-Pit tavern, hoping to catch the vandals in the act… 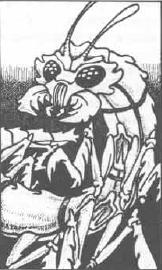 After a few false alarms, and naps(Ryla and Kruxin), the hidden guards are awakened by a loud shaking and crash. They find a confused gnome in the cellar, who explains she “fell up through a hole”…  A short time later, Kayla falls into the cellar hole and while she asks to be pulled up, she actually gets lowered further down by Kruxin. The party follows. After avoiding a cave-in, and battling some giant badgers, the party rescues the mysterious gnome from a giant insect creature.  They find enough clues that lead to the end of the vandalism on the Ox-Pit tavern.

After a mostly sleepless night, the adventurers return to work at the party. Chroomeg thanks the group and pays the agreed amount with an additional bonus from the gnome they rescued. Most of the adventurers are able to perform their daily duties except for Charlie, who’s entertainment performance was below par on the 2nd day… DM note, performance checks were made at disadvantage due to the lack of sleep. Ryla probably shouldn’t have had disadvantage since she fell asleep while guarding the tavern.