The medicine to the green fog disease is administered. A debt collection notice is delivered. The next mission is to escort Dubricus, the Keep’s translator, to the bugbear cave.

Yesterday was a crazy day – while you were searching for the hermit in the forest, a lot of shit has gone down at the Keep…

Corrath (one of the gnome tailors) returned to the Keep early in the morning bloodied and in distress. They were ambushed – their “escort/security” killed, and her husband was taken prisoner. Everything they had – carts, clothes, dogs were all taken.

A sealed message that these bandits instructed that she give it to Lumina – it reads:

“Another late payment penalty has been collected. This time your little associates paid for your delinquency. Your luck will soon run out – return our money now!  Puk puk puk.” 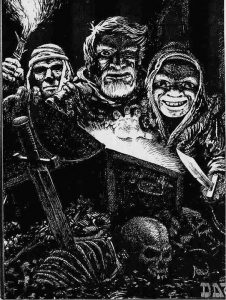