When we last left off, the group raided a bandit hideout and found a trapdoor under a card table. The trapdoor led to a fog-filled tunnel.  Now lost in a labyrinth of caves, the group wanders aimlessly…

The group single-filedly proceeds through a long, narrow bending cave between 200 and 400ft long. Patches of fog lie here and there. Some sections are a bit tight, – every now and then Wulfgar’s keg scratches up against a cave wall. Eventually we stop at a 6-way intersection. While we’re paused, Jamwar asks Wulfgar for a swig of ale.

The cave halls echo with the sound of snorting (like a pig?) followed by a single high pitched yelp then more snorting. No one can determine which direction the sounds came from.

Ninharma, for some reason you found it extraordinary difficult to focus and map this area.   You’re not confident about the accuracy of your map since entering the cave from the trapdoor under the table.

Wolfgar, normally has some natural sense of direction while underground, but he’s also disoriented. In fact, everyone has difficulty concentrating and performing mental tasks – die rolls will determine which direction you take until further notice. Also, chanting spells/prayers have a ~50% chance of failure in this area.

You might have considered turning back the way you came, but you can’t determine which cave hall you came from. 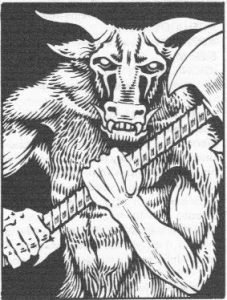