You miraculously escaped the minotaur cave with your lives! Inside the minotaur caves, it may have seemed that your comrades were doing more harm than good. Marcain apologizes again Revned! You spent a night with the bugbears.  Now reunited with Dubricus, your wounded party makes an extremely cautious retreat out of the ravine – in hopes of returning to the Keep safely.

It’s obvious that some creatures are in the brush and trees around the ravine. It takes about 2 hours to make a safe and slow retreat from the cave/ravine area. A few times you spot a small group of kobolds but they keep their distance. No further signs of the bandits – until you make your way out of the dense forest…

There, along the edge of the forest and road, you spot a stirge (the large, flying, blood sucking insect with the long beak) feeding on a headless human female body dressed in Lightswift.  Near the body are coins (you’ll roll for Copper, Silver and Gold); And, approximately 10ft away from the body, lies a small 14”x8”x6” wooden chest with the lid half broken off. Near it are some playing cards, a red apple, some bread, a mirror, 2 small vials that look like healing potions, 3 rings, 2 cheap necklaces, and some material that could be used to make spells/potions (roll d100 to determine value). Also a group of 5 sticks that resemble magic wands – tied together in a ribbon.  Out of everything you find, you immediately know that the ornate silver mirror (not broken) – is worth at least 100gp. 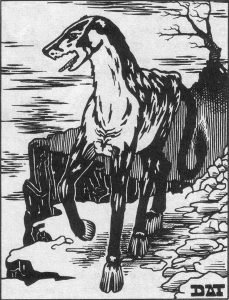