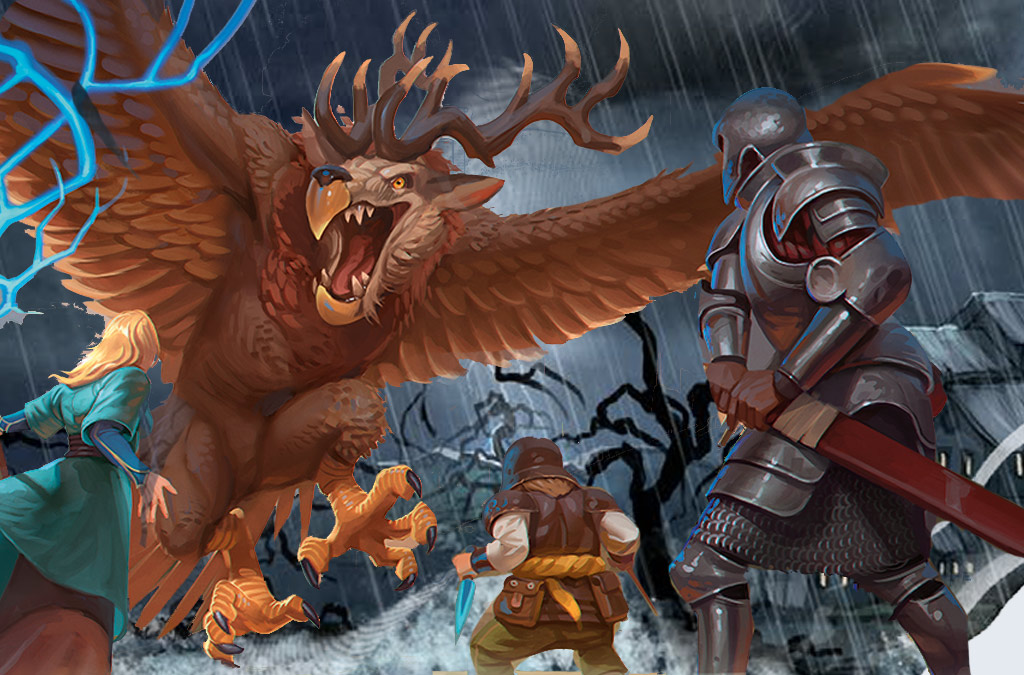 Quixsy escorts the three survivors from the basement back to the boat docks. The rest of the party continues searching the hermitage for missing survivors. Night begins to fall as they make their way up the tallest structure – Archais’s Tower. The heroes search for the wizard, Archais, and a magic portal. They pass through a cluttered storage room and then make there way into Archais’s quarters. Part of the tower’s wall has collapsed away and there is a trapdoor in the ceiling.

Titan and Snaps go to the trapdoor while the others search the room. Guy detects a magical box buried in the rubble. Titan and Snaps climb up to the next floor. They spot Sargassum lying near a bell, and monstrous Peryton can be seen flying toward them. The flying carnivorous elk strikes Snaps with its horns.

Snaps runs to Sargassum and carries him to the trapdoor. Titan takes over and drops Sargassum down the hatch to safety and jumps down the hole after him. Guy manages to blast a few feathers off the beast with some eldritch blasts. Gnurm casts a spell but it has no effect. Snaps manages to dodge another flyby attack before lowering herself back down the trapdoor and closing it.

Now mostly safe, the heroes quickly search the room. Rasp can be heard above scratching at the door with its claws and bumping into the bell. After recovering some clues, our heroes descend to a lower level and bunker themselves in for the night. Quixsy escorts everyone on the boat back to the tower. Waves of undead attack at night and the party are able to defend their strategic location with ease.

One of the things found was a journal from Archais. It contained several notes:

Our worst fears are confirmed. Virgil has brought word of disaster. A war galley fully loaded with pirates approaches from the southwest. It flies the flag of the raiders and bears the name of the cursed shipTammeraut. We must prepare what feeble defense we can muster. Woe to the folk of the coast at the approach of this bloody tide.

Miracle of miracles! The storm lord has answered the prayers of our illustrious chaplain. A furious storm blew in from the open sea and swept the war galley to its doom. But I believe that the vessel went down near the Pit of Hatred, an ill-starred undersea chasm two miles south of Firewatch Isle. This does not bode well, for the rift is said to be a passage to a source of interminable evil that was long ago sealed away. If the wreckage should rupture the wards, terrible darkness might be unleashed. I must mount an expedition to the sunken hulk and make sure all is well.

A fell wind blows this evening. I fear the wards on the rift have been broken. I must set out first thing in the morning to inspect the wreckage.

The box found by Guy contained several magic items, some which are directly linked to closing a rift if the need ever arised. Pressure capsules, sovereign glue and potions of water breathing.

It’ s clear now where our heroes must go. 2 Miles to the south, underwater is a shipwreck of the Tammeraut. The portal they seek is also known as The Rift and the Pit of Hatred. It lies near a shipwreck. According to the notes, Tharizdun is about to escape his prison. Adventurers must now race to close the portal before the next night.

Journal entry from 3 weeks ago.

A zombie roamed across the beach. A few of the hermits were able to destroy the foul creature.  It carried a strange note – It was not addressed to anyone. It simply said “Sgothgah’s work is nearly finished. The youngling will be under our power soon and delivered to the Endless Nadir.  Hail Tharizdun!” signed “Mr. Dory”

Random notes found in Archais’ quarters about a Prophecy/event

Waves of undead will make their way to Firewatch Island. If such an event occurs, heroes will be needed to seal the rift. The rift might lead to a location known as The Endless Nadir – once an abolethic city which has fallen through the hands of sea elves, tritons, and even sahuagin  over the years.

On the third night – Tharizdun will escape his prison realm.

Firewatch Island is an outpost created to protect and defend the settlements of the nearby coast.

Firewatch island must not fall into the hands of the undead

Seek out Heroes. You’ll know you’ve arrived at the correct location when you see black acidic oceans. Heroes won’t survive long in this world. Crushing depths (use capsules to offset some of the effects). Travel to an island of bones and seal the nearby portal before the chained angels arrive and shred you. The rift’s location is where Pirate captain Syragul’s ship, The Tammeraut, sank.

Some may not make it back.