Wulfgar, Mirajane, Lithos and Revned are teleported away with the Dr. Who theme song playing in the background… The terrifying bone golem disintegrates. Calina and Lumina were left behind.  You are now at the doorstep of tavern!

Titania partied it up in the grand desert city of Ylaraum with Kevgold for a few weeks. You also had your mummy rot cured and your necromancy dream curse removed by the priests and wizards of the Ylaraum colleges. The cure and curse removal cost was quite expensive (you took out a loan and still owe 2000gp). You ended up signing-up for a 15 month long mission, serving Pelor to help pay down your debt. You may have tried to find the Lost City ruins that you spotted after the desert sandstorm, but were never able to find the ruins again.  You posted notes throughout Ylaraum and offered a reward for information on your lost comrades, but never heard a thing.

After 13 months in Ylaraum, a mission brought Titania back to Kendall Keep and she had the means to release the halfling, Helga Tumblebelly from her frozen statue-like state. FYI, Kendall Keep looked much worse than the last time your were there. Helga is now indebted to Titania for being freed.

After freeing Helga, you continue your original mission – a high priest from Ylaraum sent you to a distant land to find out what happened to a colleague who has not been heard from in a very long time. You and Helga have been traveling the roads for the past 31 days to the church of Château d’Amberville aka Barovia.

You find yourselves in a warm and quiet tavern on a cool, wet Fall evening. You are a day’s travel away from the village you need to get to.  While seated in a tavern, a familiar face comes to greet you – MiraJane! 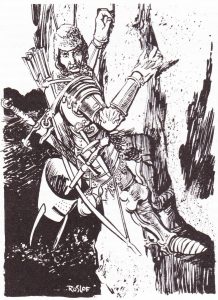 Inside the tavern, you surprisingly run into Titania and Helga who were also there – about to complete a long mission for Pelor.  Titania claims that she has not seen you in more than a year, although to the others, its only been a few weeks.

Inside the tavern, a mysterious gypsy delivered a letter to you.
A plea for help from Barovia, Ireena Kolyana needs help! Wealth is offered for assistance.
The letter is signed Kolyan Indrirovich, Burgomaster. The next morning, most of you get supplies and excahange coins before heading out.

You pass through a magical gate surrounded by dense woods. Following the trail, you find yourselves in an unfriendly, mostly abandoned town and you follow the sound of a woman crying.

At the Blood of the Vine tavern, you meet Arik (beefy asshole bar owner) and Ismark (even beefier muscle-bound bouncer, who is a slightly more talkative). Ismark is the brother of Ireena and his father is Kolyan (the Burgomaster); He insists that the letter you have is not from the Burgomaster. He also points you in the direction to Ireena’s home.

You find the battered mansion of the Burgomaster. At first, Ireena is reluctant to let you in. You learn that her father has been dead for 10 days and she barricades everyone inside a central room. It was a tense night with creatures attacking and breaking into the mansion, but eventually they leave.

The next morning, you help bury the Burgomaster at the local graveyard, behind the town church. Titania finds Donavich, the priest of Barovia, but learns that a great evil (Donavich calls it the devil) has trapped everyone who passes through the gates. Every night an evil invades the town. Donavich is very weak. Every night he wards off evil from the church. He tells you about a book which might be found in the library of Ravenloft (the castle that looms above the small village) which might help you destroy the devil. On a side note, you learn that Ireena is the adopted daughter of Kolyan, and for some reason the people of the town avoid her – which might partially explain why no one helped her bury her father.

On the way to Ravenloft, you took a ride in a carriage on auto-pilot up a steep, winding hill. The ride was quite violent. You safely crossed a rickety wooden drawbridge that spanned a 1000ft drop. You are now in the front courtyard of Castle Ravenloft. A cold fog swirls and a light drizzle begins to fall.  Straight ahead, a warm light spills from the keep’s open main doors.