Our adventurers are about to confront an evil necromancer, Tarlech. First, the adventurers need to pass through a large wooden door with a mysterious inscription. At the end of the day, Revned, Titania and Arpad experiment with some necromancy…

You’ve defeated the undead prison guards and freed the prisoners. A familiar face stumbles out of the dark prison cell – Beldak (Corrath’s husband)! The young girl, Arpad, suggests that you “take care” of the a-hole necromancer now – then she and the prisoners can escape with you. Arpad quickly and quietly points you in the direction to Tarlech’s chamber – it’s just down the hallway from the library. There’s a large sturdy door made completely of wood. It looks as if the metal parts (locking mechanism and handle) have been removed and covered with wood. – A small intricate inscription is in the door…

Barbarians, if the party smarties don’t open it – you might want to smash it. This door has AC 8 HP25;

Arpad is very eager to leave – she seems both confident and happy that Tarlech is going to meet his doom. She hurries off to wait with the prisoners away from the danger -asking if anyone is going to wait with her and the prisoners. You might still be a little wary of listening to this girl, but so far, everything she’s said has been true and helpful.

From Jamwar: “Damn it, Where did my shield go?!” 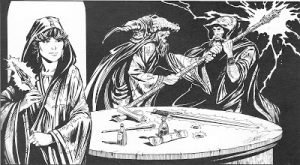 Another adventurer, Lithos (an elven fighter), joins the group – he was a prisoner in Tarlech’s cell. Juvia and MiraJane stay with the prisoners.

Scooter lifts Helga to get a better view of the inscription on Tarlech’s door. Helga trips a wizard trap by reading the inscription out loud and a glowing snake made of light appears and strikes Helga – magically paralyzing her. The group sets Helga aside, and Jamwar and Scooter decide it’s door charging time. On their second attempt the door bursts open.

Unfortunately, as soon as the door is busted, a roaring, burning ball of fire explodes, taking down Jamwar and Scooter. The remaining group battle Tarlech, his mummy cat and a zombie-like female.  The zombie is put down first, but the undead cat proves very challenging. Lithos rushes in and almost defeats Tarlech with a single swing of his sword. Next, Revned launches a perfectly aimed arrow but sees it shatter against a magical barrier. As the battle continues, Revned  decides to use two magical items of unknown power in hopes of defeating the necromancer. Neither item is particularly helpful – the wand detects metal items, and the ring grants her the power of flight (although everyone else thinks she’s delusional). The remaining adventurers fail to stop Tarlech before he morphs into smoke and escapes through a crack in the wall.

A secret passage is discovered, and Lithos finds a body covered in spores. Poisonous spores erupt and Lithos passes out in the hallway. Next, the mummy kitty runs off, disappearing down the dark passage way. The group loots Tarlech’s chamber but with four members out of commission, they decide to not pursue Tarlech. They return back to the camp with their wounded comrades and rescued prisoners.