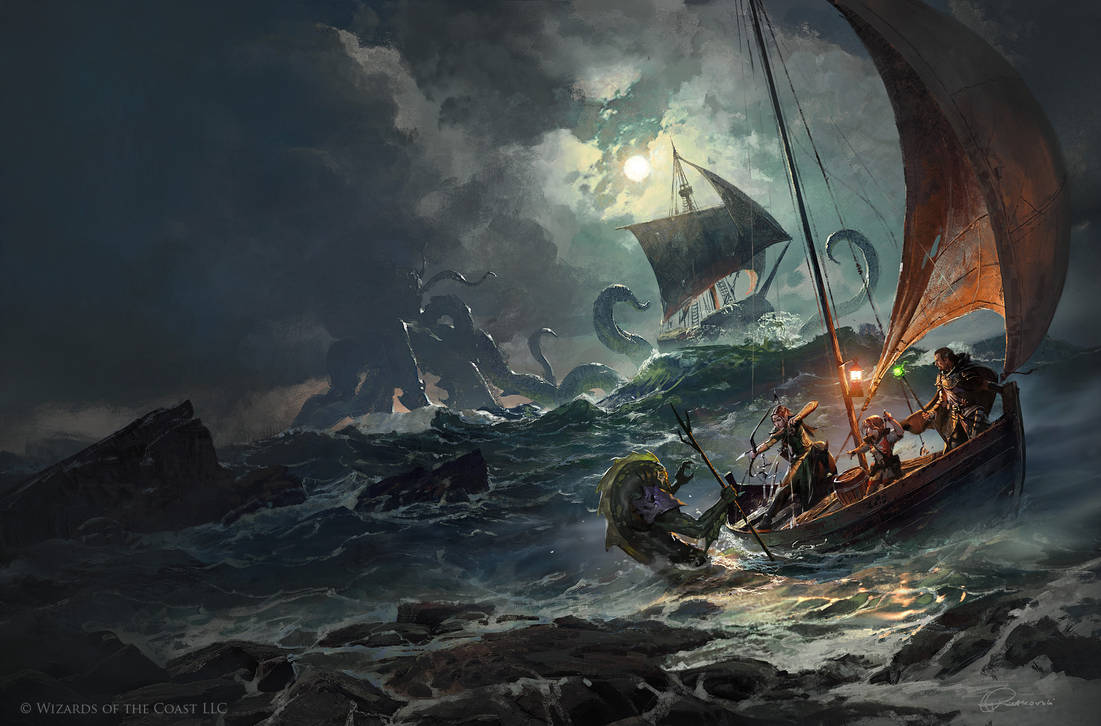 Adventurers hear rumors about a sunken boat with a valuable fishing pole around Warthalkeel Ruins. Additionally, local fishers tell stories of “mud demons” near the ruins and refuse to fish the area. The one-legged whaler and priest of Procan, Wellgar Brinehand, hires adventurers to investigate the area and put an end to whatever is causing the demons to appear – perhaps a portal needs to be closed. 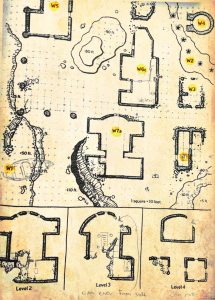 Centuries ago, a kraken attacked and pulled a small village into the sea. When adventurers arrive, they quickly spot a sunken fishing boat and recover a silver fishing pole. They also harvest a giant crab. After scouting the underwater ruins, those that need it, drink their potions of water breathing and begin searching for the origin of the mud demons/portal.

Adventures enter a large building which appears to be a temple dedicated to a kraken (Vaalastroth). The place is falling apart, but they are able to safely maneuver their way through. Mossback gets tangled in a kraken shaped chandelier and accidentally destroys it, Valamoir snags a few crystals. Along the way, they find a shiny green conch. Kelp blows on it and nothing happens. At the lower levels, the building is filled with octopi.  Mossback has a brief conversation and just as the spell runs out, the last word from an octopus is “Don’t”. Kelp opens a door and finds an drow woman waiting for him on the other side. The room is filled with rusty braziers and brassiers. She demands to know why they are here. Kelp attacks.

The party surrounds the lone undead drow woman – stabbing, mocking, and grappling her. She fights back unsuccessfully, but she’s tough and able to magically heal herself. She offers to surrender but the group does not accept. Suddenly, she unleashes a magical swarm of water boatman insects. Within seconds, Kjardi and Kelp are devoured, Guy falls unconscious. Angrily, she demands that the intruders leave but the remains of their fallen comrades are now hers.

Mossback gets Guy back on his feat and the group exits the building.  Salty Fingers (the boat rower) dives in to see how things are going. They do a quick search of another building. They come across a chamber with hundreds of skeletons, they seem to be in a temple dedicated to a god of slaughter.  Behind a locked door, on-top of an altar, Valamoir claims a finely-crafted mace. The rest of the building is searched but nothing else of value is found.

Outside, they find a merfolk woman searching for something. Her name is Gali, and she lost a green conch seashell, when she blew on it she unknowingly summoned a demon. She accidentally dropped the shell in this area and is trying to recover it before things get worse.

The group tells her the unfortunate news of what they found and that the shell is with an undead drow.

Salty Fingers rows the surviving group back to Saltmarsh and they sell the silver fishing pole. Off in the distant, a small demon bubbles out from a nearby muddy bank…

I once knew a man named Kelp
Who, before he could yell even help,
got eaten by bugs,
chunks fell to the rugs,
we could naught but shrug and say “whelp?”