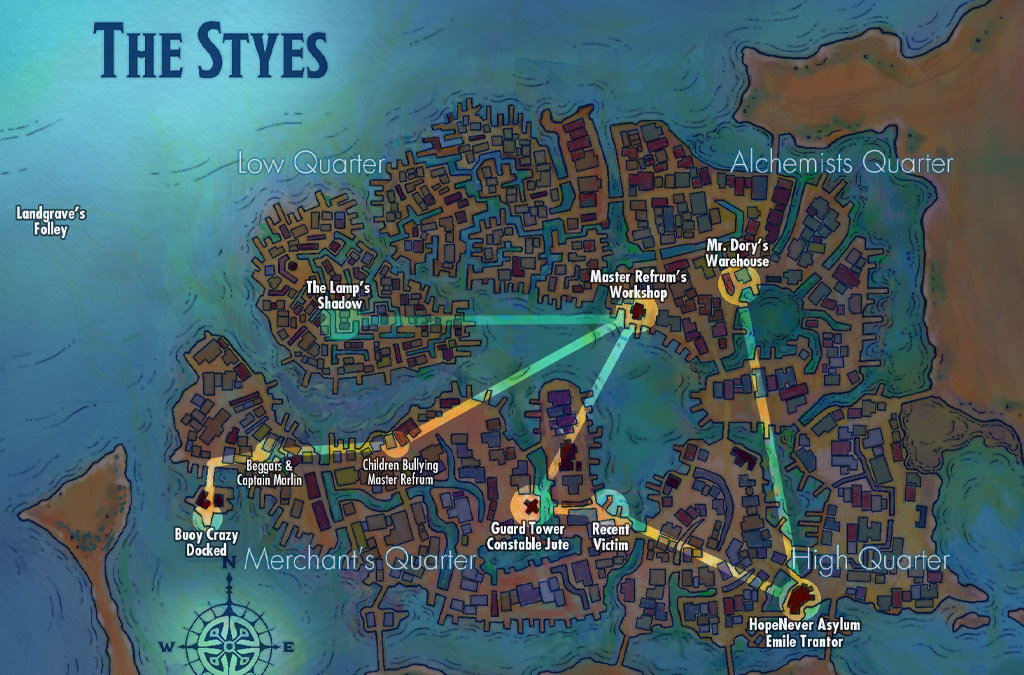 Kelda shifts into a form of an octopus. She and Sargassum scout out the underwater portions of the temple. They find 2 other entry points, but decide that the tower stairs might be the best approach. Sargassum spotted 2 large fish creatures – with tentacles and 3 eyes, they disappeared in a cloud of silt and ink.

At the height of the Styes’ long-ago glory, a local eccentric noble named Bryson Landgrave announced his intention to discover what lay on the underside of the world. To that end, he ordered the digging of a great pit that would eventually lead to whatever was there. Locals dismissed the effort as mad, but the noble was rich, and no one complained about the wages he offered to diggers.

For reasons no one could comprehend, Landgrave chose to excavate down through the solid rock beneath a small islet a mile or so west of the Styes. The work went well at the start. But then workers began to perish in bizarre or mysterious accidents. In an attempt to counter his ill luck, the noble commissioned the construction of a temple (using material removed from the hole) at the dig site to confer blessings on his work. As Landgrave’s luck would have it, on the night the temple was to be consecrated, a violent earthquake struck the islet, which sank into the sea and took the pit, the temple, all but a handful of workers, and Landgrave himself with it. Only the temple’s spire is still visible above the waves as a testament to what becomes of rich fools, and the site became known as Landgrave’s Folly.

Firbolg detects magical warding sigils on a staircase and entryway. The group avoids the stairway and Quixsy attempts to swim past the warding glyph. An electrical pulse fills the tower, and everyone suffers lightning damage. Quixsy regains her composure but is virtually blind when she enters a dark, ink and silt-filled chamber.

Strange voices can be heard, Firbolg picks up part of the conversation and relays it to the group. The voices (Kang and Kodos) are seem to be debating what they should next with the Kraken. The conversation turns to the adventurers when Kang and Kodos sense their presence. Guy, Snaps and Firbolg are the first to enter, while the other stay hidden.

It’s a confusing conversation – no one seems to have firm plans for the Kraken. However, it is clear that the aboleths, Kang and Kodos, want to destroy Sgothgah. When Quixsy mentions that she knows where Sgothgah can be found, Kang and Kodos decide to leave the adventurers with the Kraken and exit the temple to deal with the “traitor” Sgothgah.

Adventurers have avoided a violent confrontation with the 2 aboleths. They find a pit with more magical symbols.  After some careful studying, they determine that this pit is where the Kraken is held. They deduct that the magic keeps the kraken from escaping. It’s also a beacon for negative emotional energy and is a kraken incubator.

How will our adventurers deal with the yet to be seen young Kraken?