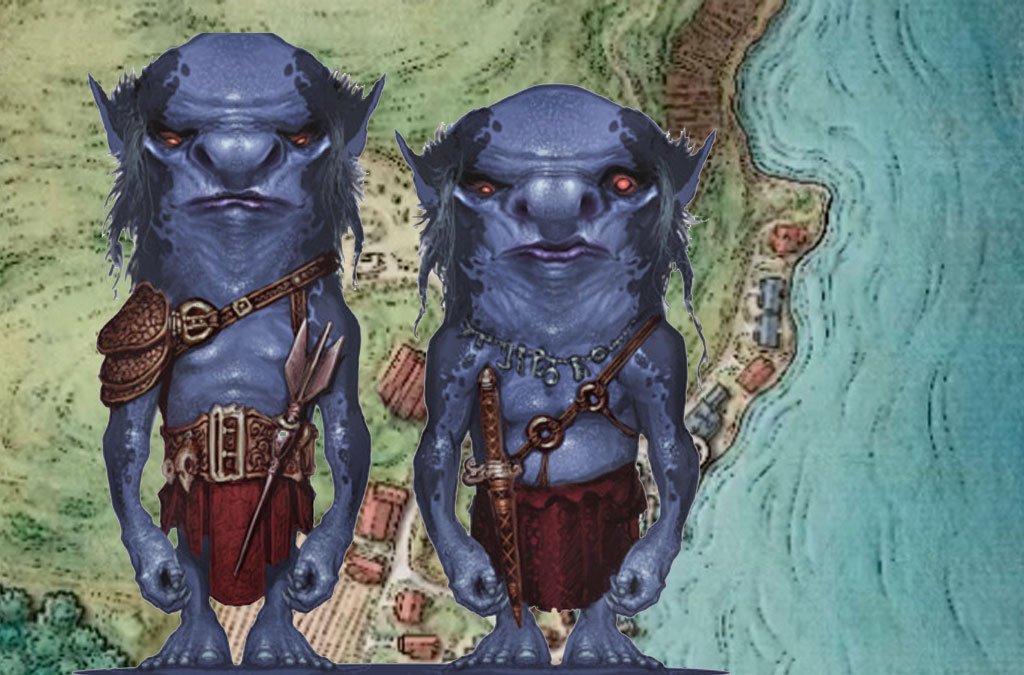 Adventurers go to Crabbers Cove searching for a missing fisher named Gloomy Hand. Fishing poles and a bucket of fish heads are purchased on the way…

A rat is spotted carrying a coin and adventurers follow, eventually arriving at Crabbers Cove. Our heroes go to investigate a house and get stuck to sticky barrel monsters in an alley. Quixsy gets bitten a few times and falls – the rest of the party destroy the monsters. After a quick recovery, more rats are seen scurrying toward the beach.

On the beach, is a group of giant crabs huddled over a body. Sar-Gassum charges ahead and punches a hole through one and grabs a handful of yummy crab meat. Valamoir blasts a hole through one with a catapult spell. Four crabs are taken down and 2 swim away.  The body is an unconscious middle-aged woman. Snaps volunteers to carry her back to town while the others rest and eat fresh crab.

When Snaps returns from town with butter and lemons, a ghostly figure emerges from the ocean. Some of the group recognize the ghost – it is Kelp (from Warthalkeel Ruins). Kelp is now doomed to haunt the underwater ruins until Valamoir returns and fixes what their group took and destroyed. Kelp tells Valamoir he has 10 days to make it right, and as he disappears back into the sea, the beach begins bubbling – sandy-beach imps attack!

The party defeats the sand imps and explores the docks. Kelda and Sar-Gassum investigate a shack filled with rats. The others approach a gnome child fishing at the end of the docks. Sar-Gassum spots a pile of coins and attempts to enter the boarded up shack through a hole in the roof and falls into a building filled with rats and two 3-ft tall, blue goblin-like creatures with orange eyes (Xvarts). Meanwhile, Valamoir falls off the dock, and Snaps follows – destroying a section of dock with her 400+lb self. The child is now trapped.  Quixsy helps Valamoir climb up a pylon.  Valamoir struggles to save a untrusting child (the child knocks Valamoir back into the sea) but eventually Valamoir succeeds. Kelda wildshapes into a rat and gets some inside information from her fellow rats.  The 2 bumbling Xvarts run out a backdoor, and jump into the ocean – Snaps (already in the water) easily brings them to shore as they continue to fight and argue with each other. No one in the group can understand the Xvarts so Kelda wildshapes into a rat again and interrogates them.

Next Session – adventures attempt to seize the smuggling ship, The Ghost!