The search for Zargon continues. Our adventurers explore the lower levels of the step pyramid, looking for Zargon. Along the way we encounter Zargon’s minions which includes goblins, priests and a magical bone golem that wields 4 swords.

We pick up our adventure from where we left last week – in front of a large stone door. Revned hears goblins talking; they are plotting something about feeding outsiders to Zargon… 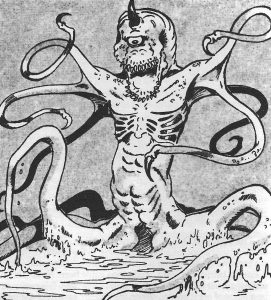 Lumina and Cali slide the door open, unfortunately the goblins inside were waiting for the adventurers.  The goblins along with  2 hobgoblin bosses are quickly slain. A series of rooms are explored – each room has a mural depicting something regarding the afterlife. Common symbols are an abyss, river, bridge and spirits.

As the search continues, 2 priests of Zargon are spotted. They try to flee the adventurers overpower them. Lumina inhales a strange green smoke which causes her to go beserk! She stabs Wulfgar with her sword. Revnd has no choice but to cast her sleep spell on the group, in hopes of subduing Lumina.

Lumina is tied down until she regains her senses. 2 amulets were found on the priests. One amulet has a red gem – inside it is a castle surrounded by fog and is believed to be an amulet of teleportation – the complete effects and powers are unknown . The other amulet is made of a black stone. Both appear to have some value, but the group also suspects that the amulets may be magical.

The adventurers eventually find a spiral staircase leading downward. The black amulet triggers the door to open. Cali leads the way down and finds that, bones cover the floor at the base of the staircase. Suddenly, the bones start moving together and a magical bone golem is formed!  Cali attacks, with the sword of Madarua but finds that this magical creature has an exceptionally strong armor class.  The bone golem strikes back with 4 swords and wounds Cali.   Seeing this, Lumina retreats back up the stairs and the group discusses a plan while Cali is left alone to defend herself against the bone golem.

Lumina dangles the black amulet down the stairs hoping it might effect the magical golem. No effect! Cali is now wounded and unconscious as the bone golem starts to make its way up the stairs. Lumina attempts to use the amulet again against the bone golem as she rushes by it and escapes out of the room, closing the door behind her. The rest of the group is now in a staircase with a bone golem approaching.  Revned contemplates using the amulet of teleportation. Wulfgar and Lithos, not wanting to be in this pyramid in the first place, tell Revned to use the Amulet of Teleportation. Revned smashes the amulet  at the feet of the bone golem and there is a brilliant flash of light.

Lumina notices that the room is suddenly quiet. She returns to aid the unconscious Cali, and finds that the bone golem and her other companions are completely gone! Cali and Lumina are now alone in the Lost City of Cyndicea, in the lower regions of Zargon’s lair. Lumina downs 2 bottles of wine…