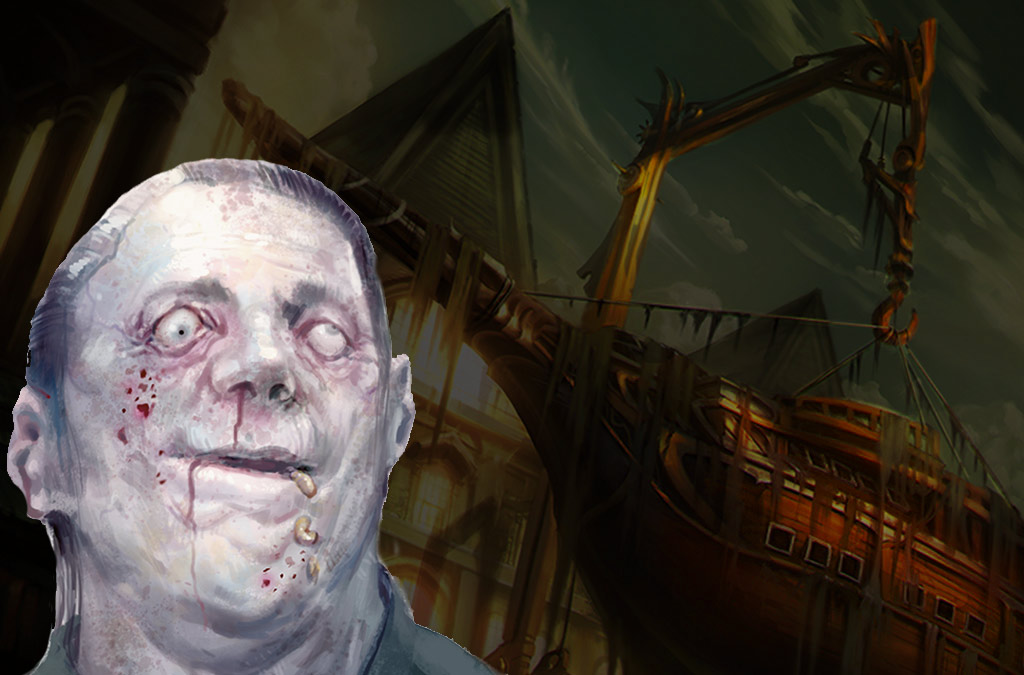 Preview of our next adventure: Adventurers have just entered an old ship. The ship hangs 50 feet in the air from a rusty crane that is connected to a warehouse.

The air in this compartment is oppressively hot and humid. Clouds of smoke rise and escape through the grate above, billowing from a pair of roaring boilers near the bow, bolted to the deck and walls on either side of a large pool of steaming water. The walls, floor, and ceiling of the compartment are thick and shiny with condensation and mildew.

Kelda decides to keep a look out from the top of the ship. The rest of the party explores the lower compartments of Mr. Dory’s house boat. Firbolg detects 4 creatures underneath them, the party proceeds with caution – Sargassum leading the way. The middle compartment is flooded with green swirling, bubbling water.  Above the watter is a slippery board, acting as a bridge to a door on the other side.
Tentqcled monsters burst out from water. The party defeats the tentacled creatures, and immediately enter another battle. A large horrible construct made of different fish parts and a humanoid female head attacks. An angry, slimy man appears out of the air and casts some spells. He seems very desperate, and willing to sacrifice himself to avoid being captured. A yellow-green gas floods the compartment, Snaps and Quixsy fall unconscious.  Sargassum almost takes Mr. Dory out, but he vanishes out of sight just as he first appeared.
First aid is administered and Dory’s quarters are searched. There is a plate of food on the desk, a mahogoney box with gems and pearls. Various papers with scribbled notes and drawings of a tentacled creature wrapped in chains. A leather bound book is discovered – it is written in a strange language.
The poisonous cloud disperses after a few minutes and the party makes a hasty exit. They make their way back to Master Reefrum’s workshop – being very careful to lose or confuse anyone who might follow them back. Eleanor is there to greet them. She has no memory of her brother, Jarne.