Your group returns to the Stronghold of Madarua with wine and magical scrolls of cure disease and remove curse. Unfortunately, each scroll will only benefit one person and the maidens don’t have the skills to duplicate the effects.  Since Lithos, MiraJane and Wulfgar are not full members of Madarua, they stand a better chance of approaching the Gorms or the Usimagarians. The maidens resent the idea that you’d ask the Gorms or Usimagarians for help and warn that you must never approach the priests of Zargon. Also, it seems unlikely that the Cyndiceans would be capable of helping.

The challenge for the sword of Madarua awaits. Once the test is successfully completed, the sword will be awarded. Cali seems the obvious choice for the sword.  Revned or Lumina are seen as decent alternatives.  MiraJane seems like an unlikely choice, while Wulfgar and Lithos are highly unlikely. Still, the leader of Madarua (Haria) makes it sound like everyone is a potential candidate.

Revned and Lumina are cured by the Usamagarians. Later, the sword of Madarua is awarded to Cali. Lithos wins the admiration of more maidens during the challenge.

Wulfgar stylishly chugs a few bottles of wine during the challenge.

Revned and Lumina also made a good showing but Cali was ultimately awarded the sword of Madarua. 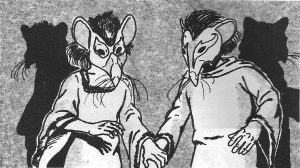 With the group cured, some members are considering leaving this  lost underground city – to continue their original journey to Ylaraum.  There is still hope that they will find their lost comrades, Titania and Ninharama…

Meanwhile, Cali tries to convince her new comrades to stay and help defeat Zargon – she has accomplished so much in the past few weeks. After recovering the magical armor and shield the maidens believe that Cali will now put an end to Zargon – and lead the Maidens of Madarua to glory and restore order to Cyndicea.