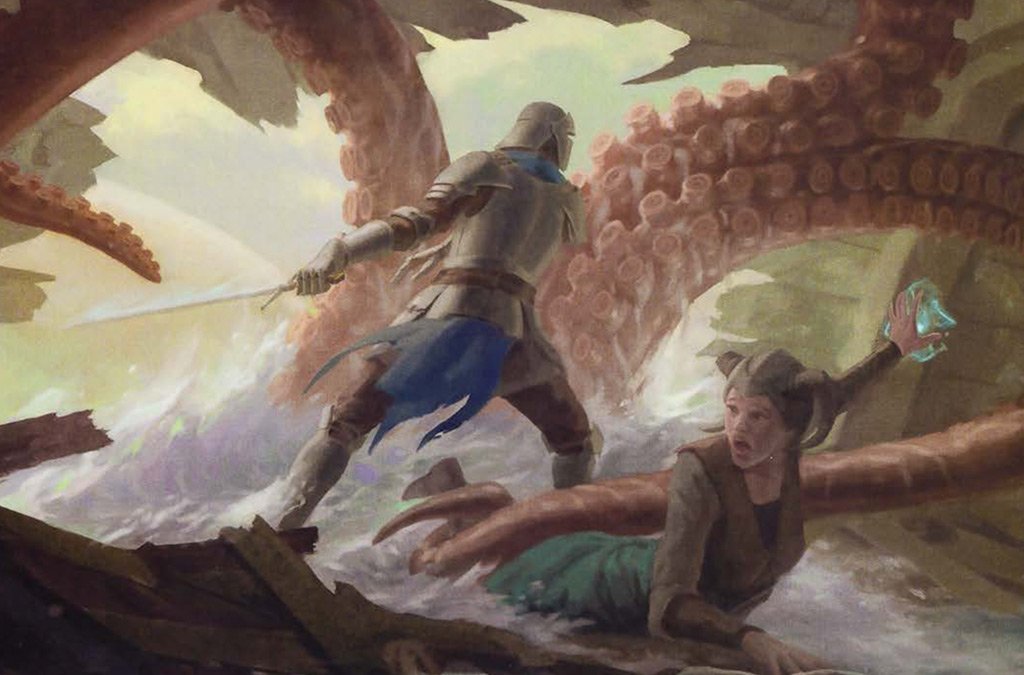 More ghouls emerge from the water and attack.  A chaotic battle ensues and the ship is attacked by gigantic tentacles.

Meanwhile, the 2 dwarves can be heard yelling to our adventures to get out now!

Jamie quickly finds the crate and with Snaps’ help the two carry the heavy box toward the magical anchor. As the ship is pulled over onto it’s port side, everyone grabs onto the anchor and “Muktuk” out. Kelda loses her grip, but Sar Gassum and Snaps manage to grab her. The anchor pulls everyone and the box out of the cargo hold and into the ocean.  The sinking ship is being dragged down by giant tentacles. Strange demons cling to the sinking ship, and the dwarves are battling spiders and a half-orc for control of the rowboat (just out of distance from the tentacles).

With incredible speed, Sar Gassum swims over and attaches the anchor’s rope to the rowboat. Everyone else makes their way to the rowboat dodging the flailing tentacles. Jamie blasts the half-orc and a giant spider off the rowboat with a thunderwave. Kelda wildshapes into an octopus and inks the half-orc – blinding him. Guy saves an unconscious dwarf floating in the water. Sar Gassum is also knocked unconscious after suffering a few bites from the giant spiders. The remaining adventures fight off the spiders and half-orc, save their fallen comrades and make it back to the elated dwarven crew onboard the Soul of Winter.

When our adventures return to Saltmarsh, Aubreck is the first to greet them at the docks. With the good news, Aubreck throws a celebratory party for our adventurers and the dwarven sailors. The adventures are rewarded 10,000gp. Shortly after, Captain Xenderos, the tiefling magic item dealer, approaches our adventures hoping that they will renew their “membership” – she has some fabulous items available for purchase!