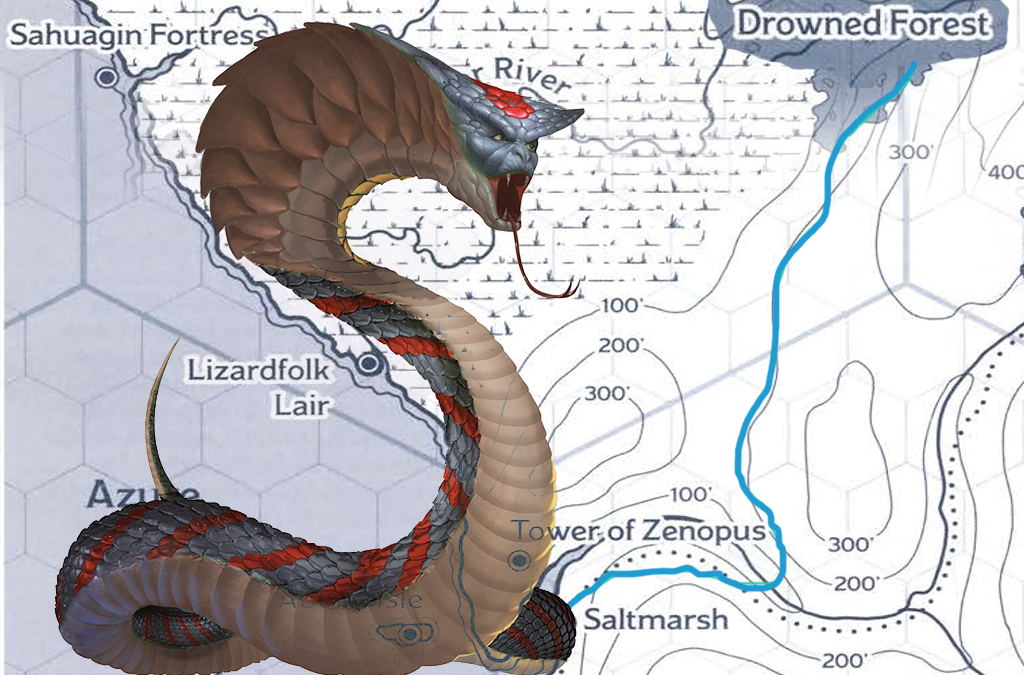 The town of Satlmarsh has been poisoned.

The Lizardfolk diplomats are interrogated, Ferrin the sunbathing halfling provides additional info and with consulting the library at Saltmarsh, adventures travel to the Dread Wood. Following the river and with the helpful scouting of a hawk they find a temple. The temple is much larger on the inside than the outside, and seems to be dedicated to reptiles.

In a large chamber with a 5 headed snake fountain, sahaugin guards stand near a pool of red liquid and take orders from a giant snake with the head of a woman. Her name might be Saja N’basa? The heroes refuse to drink from the pool and instead a battle breaks out. Sar-Gassum charges forward at great speed and engages their leader. Unfortunately, she takes him down with her poisonous bites. The remaining party battle the guards and a monstrous creature made of bones. By the time they deal with the guards and catch up to Sar-Gassum, it’s too late.

Saja N’basa claims she cannot be killed and will return.  However, for the time being, it appears that the adventures have defeated her.

Treasure found at the temple in the Drowned Forest and for clearing the polluted river:

*Discounted resurrection fees or a Saltmarsh ceremony for the fallen Sar-Gassum;

Wrap up – at the reptile god temple.

Death of the monk?  Sar-Gassum

Pools with red liquid – try to understand and destroy the Hex-Plague-Scale Curse – are the lizardfolk responsible?