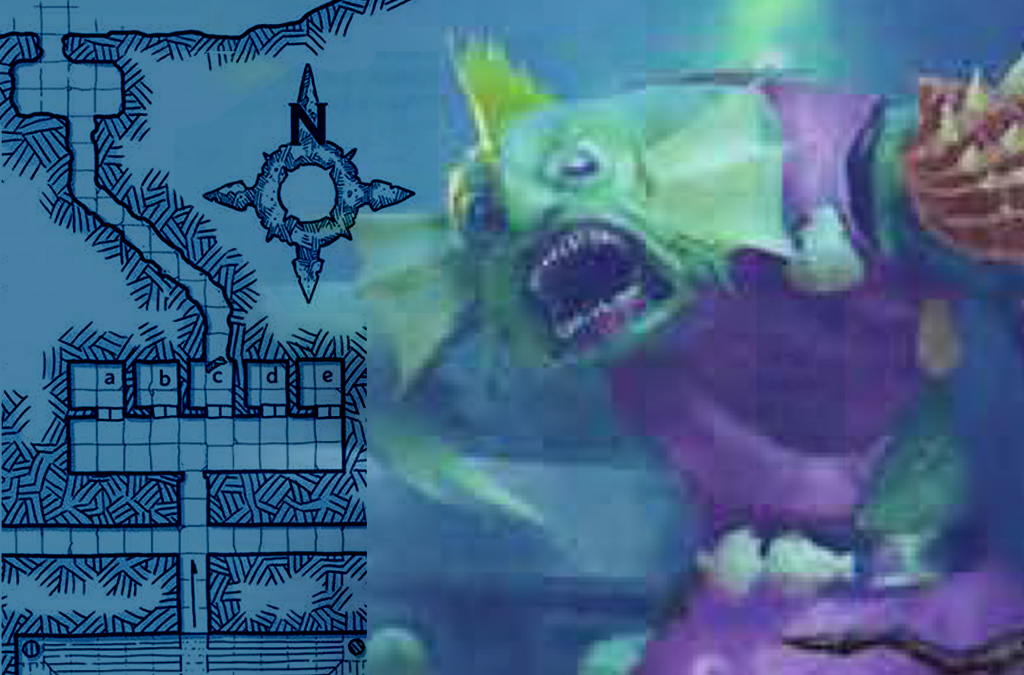 We continue from last session – from within a sahaguin torture chamber. Five doors to the north and an open hallway sloping downward to the south. The locathah, Borgas, has grabbed a spear and wishes to join the adventurers!

The adjacent holding cells are searched. A one-legged Triton named Kysh is freed and he tells the group that his companion Eli the Sea Lion is in one of the cells. Eli, can be difficult to control so they might not want to be near when it is set loose.

The group debates whether it is safe for the prisoners to join them. Jamie heals the prisoners of their wounds, but they are still exhausted. Borgas wants revenge but Sargassum (aka Sgt Awesome) eventually convinces the locathah to lead the prisoner escape and tell the town of Saltmarsh what they have found in case our adventurers don’t make it out.

The adventurers move out stealthily – searching for more information on the sahauguin forces and their comrade Snaps. Down one corridor, they find a large double door and hear what sounds like many creatures (the sound is difficult to make out), Using the lizardfolk maps they attempt to make it to a staircase leading up.

Guy, scouting ahead and invisible, decides to quickly look into an adjacent chamber – it appears to be an armory filled with weapons, equipment and sharks! Battle ensues, Jamie swims to the rescue and blasts one with an eldritch blast. Most of the sharks swim by Guy (invisible) and bring Jamie down. Kelda saves Jamie from certain death when she quickly shifts out of octopus form and tells the sharks about a big juicy sea lion down the hall. The sharks swim away.

The armory is quickly searched and Guy spots and opens a secret door. inside is another chamber with sacks and a coffer. Sargassum rushes in and the others follow. There is a blast of cold and then the secret door falls shut injuring Kelda. Our heroes are now trapped. Guy casts the knock spell twice (creating 2 more loud noises) the chest is opened and the secret door opens partially. They quickly grab the treasure and exit the treasure room. The sahaguin have been alerted and will be here soon.