We join forces with Wolfgar & Titania (the group is now 6 strong);
The group heads to the abandoned keep just north of the town.
Revned puts kobold guards to sleep;
Ziraguin finds a magical bed;
Ziraguin yells down a hallway alerting Bargle ;
We capture  and bring back Bargle – but Victaries insists that it’s an imposter;

Before the group left town, they hear several rumors while at the local tavern…

Signs that you notice while exiting the tavern: 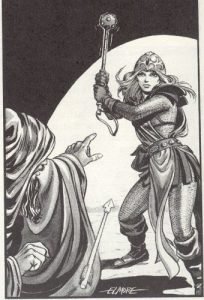 Wanted: Bargle – 1000gp paid by the town rulers – “The death of Aleena, a well known cleric was the last straw. We want this danger stopped once and for all, so keep your eyes open!”

Beware: potential vandals/troublemakers spotted on nearby farm; Individuals are described as a tall male with big hair, and a female elf with a pointy hat – be especially careful of the elf..

Experienced Adventurers wanted – see the castellan at the Keep on the Borderlands – approx. 1 day south of here.