Between the Altan Tepe and the Ylaraum desert, our adventures were ambushed by goblins and attacked by a giant scorpion. They continue forward, and encounter a desert storm of blinding sand and whirlwind tornadoes. The group is split in three – Titania rides a aboard Kevgold’s dune lizard toward the capital, Ninharma hitched a ride on a flying carpet and Revned, Lumina, MiraJane, Wulfgar and Lithos discover an entrance into an ancient step pyramid. 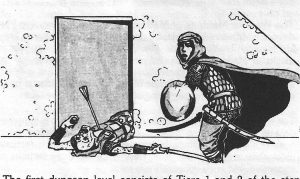 We are relieved that the most difficult portion of the Altan Tepe Mountains is behind us. Titania was able to revive Ninharma’s unconscious body when we reached the base of the mountain cliff. Moments later, Fhamoril suffered injuries from one of Titania’s “heal” spell. “Uhh, WTF Titania?” complains Fhamoril. Jamwar asks Revned, “How did you manage to cause so many avalanches?”

The area is covered in tracks from various creatures – humanoids, horses, goblins, and some other unusually large patterns. We have several miles of downhill rocky terrain to traverse before the desert sand dunes. The foothills are covered with orange-yellow rock formations ranging from a few feet to 20 feet in height. The hot desert winds howl and echo through the rocky landscape.

While searching for a “safe” rest area, Lumina spotted the skeletal remains of a large lizard creature (nearly 12ft in length). We now rest in the afternoon heat and plan to travel during the cooler night.

With the hot desert heat, we are now resting during the day and traveling at night. While traveling through the foothills, our group was ambushed by goblins and we managed to attract a giant scorpion from a nearby cave. It was a horribly chaotic battle.  Scooter was the first to fall – at the scorpion’s pinchers and poisonous sting.  Next, Fhamoril was accidentally slain by Lithos.  Almost at the same time, Jamwar charged a group of goblins to the right but was outnumbered and taken down.  Unfortunately, Jamwar was unconscious and wasn’t able to protest against Titania’s “help”. Again, Titania’s heal spell caused more harm than good.  After the goblins were slain, and the scorpion retreated back into its cave, we solemnly buried our fallen comrades.

We cross paths with a colorfully dressed halfling who rides a giant dune lizard. Kevgold appreciates the company of Lumina (asking if she is of Usamigaras), Revned and Titania and travels with our group to Ylaraum. Kevgold shares the tale of the Lost city of Cynidicea and how Wulfgar’s mask is from the Brotherhood of Gorm.  Titania  rides with Kevgold swapping stories throughout the day and night. While traveling at night we were surprised and separated by a desert storm. Most people lost some equpment during the storm. Titania, Ninharma and Lithos are missing from the main group – we hope they find their way to Ylaraum. We found a step pyramid and take shelter inside, and we hope to find some water. The temple had 3 statues at the top – one of the statues has  a face just like Wulfgar’s mask.