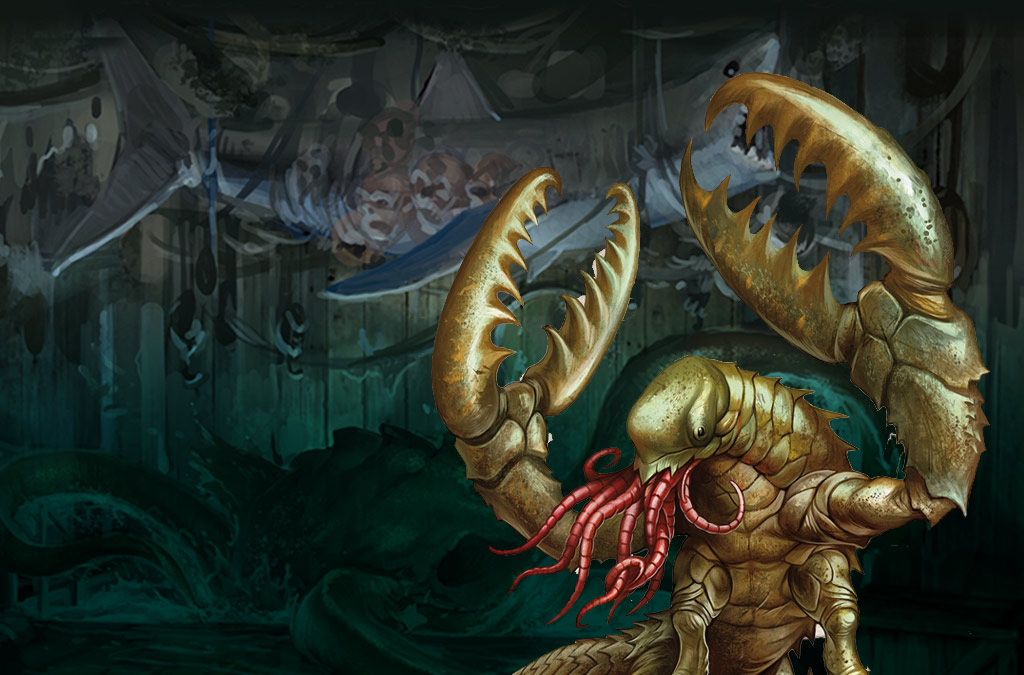 A hallway collapses, and Snaps falls into a pool, Firbolg also slips and falls in. Sargassum and Kelda help them up. Quixsy moves back to guard the outside entrance and Guy flys over to investigate the door on the other side of the hall.

A telepathic conversation takes place in all the character’s minds. Firbolg and Kelda are not welcome and the voice gets angry when Firbolg moves forward.  The voice doesn’t trust Kelda and Firbolg because of their ties to nature and/or desires to restore the natural order.

Guy, Sargassum and Snaps are asked to enter the next chamber. In the next chamber, the walls, floor, and ceiling are covered with carvings of complex spirals and smeared with blood. Crude chairs and benches are arranged in a semicircle facing a smaller antechamber to the far end. A rotting shark’s carcass, hangs from the rafters on frayed, mildewed ropes. Humanoid heads in various states of decay have been crudely lashed to the shark’s flanks

The voice says its name is Sgothgah it explains it can help the adventurers, and asks them to travel to Landgrave’s Folly – a location about a mile away from town. There, they will find what they are looking for – the young Kraken. Sgothgah tells them the following:

Back in the other room, Kelda detects several large creatures moving into position below her and Firbolg. Suddenly the floor shakes, and they both slide down the hole into the water below. Large monsters with tentacled faces and pincers move in. Firbolg climbs out but Kelda is grappled by two of the monsters.  Kelda is crushed by pincers and is near death.  The creatures suddenly stop their assault and fall back allowing the party members to retrieve their companions.

Sgothgah says he is allowing them to leave with their companions – go to Landgrave’s Folley and deal with the enemies. Praise Tharizdun!