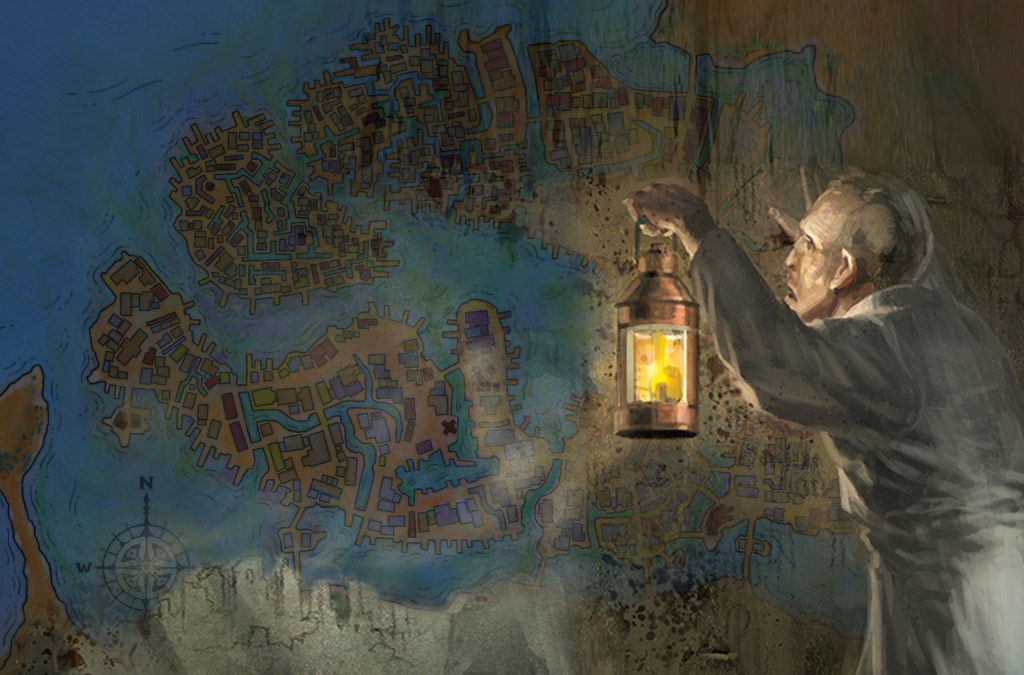 Adventurers have traveled 20 days by boat and have reached their destination – The Styes – a port town that has fallen into despair and decay.

Captain Quixsy docks the Buoy Crazy and the crew begins exploring the streets of the Styes.   It becomes obvious that our adventures are gaining the attention from various citizens.

A barrage of beggars approach and ask for spare coins. Firbolg gives out a few and the number of beggars grow. Moments later, a guard captain, Marlin, dispatches the gutterpups and collects an “Entrance Tax”. The group debates it, and eventually pays 60gp. Marlin threatens the beggars with being locked in the stocks if they harrass the adventurers. The adventures continue without further obstacles.

Down an ally, they see a group of kids bullying an older man. Quixsy and Snaps scare off the kids and Sargassum thwacks a few on the rear before they can get away. The old man is Master Refrum, he offers them shelter and food at his workshop and asks for an escort.

Adventures are led to a small workshop in the alchemists district. They have some broth and share stories with Master Refrum. They also learn that Eleanor’s brother was hung yesterday, accused of murder and they don’t believe he could have committed. The Styes suffers from various elements and Master Refrum is convinced that the adventurers are were sent here by the gods – to bring some light in a city overwhelmed by darkness.

Adventures begin an investigation that takes them to Constable Jute at a guard tower and Emil Trantor at HopeNever Asylum.

In the end, they uncover unusual behavior directed by or committed by a Styes Council Member. They also discover some clues depicting a tentacled beast in chains – perhaps a Kraken?  Mr. Dory is now a prime suspect in the investigation.