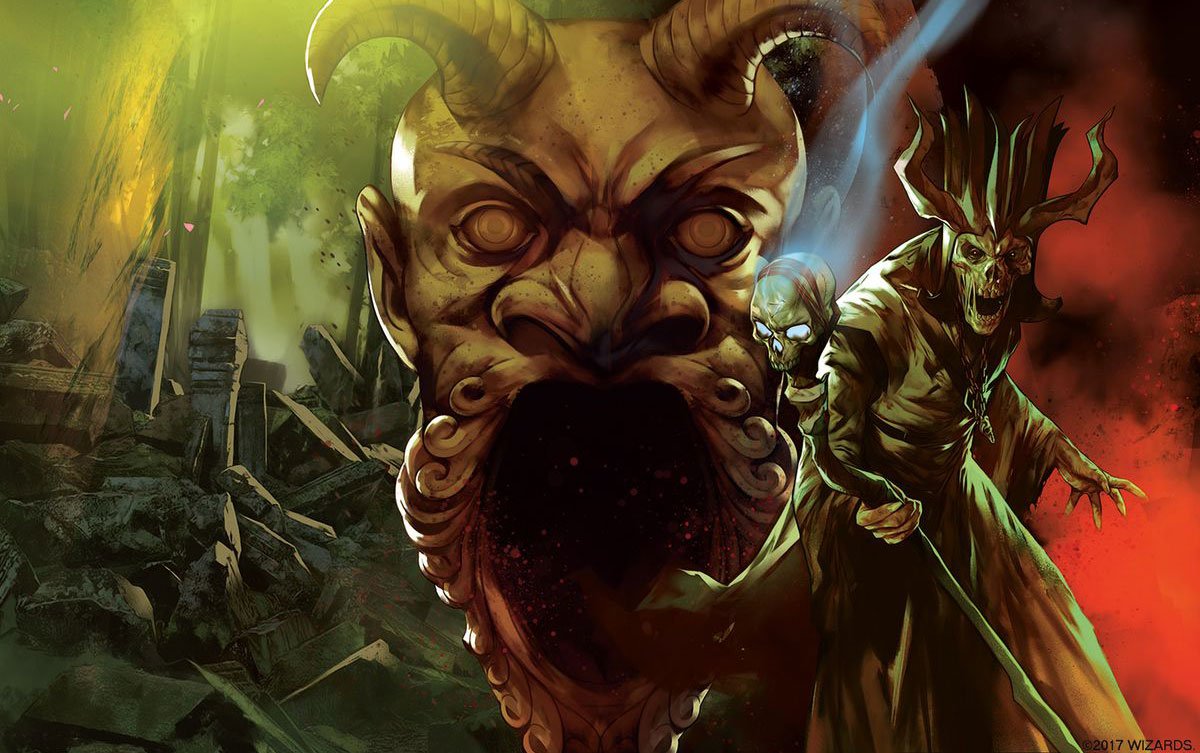 Tomb of Annihilation – the 2018 Campaign

Adventurers arrive on the jungle island of Chult to help put an end to the Death Curse. Below are brief summaries of our weekly game. 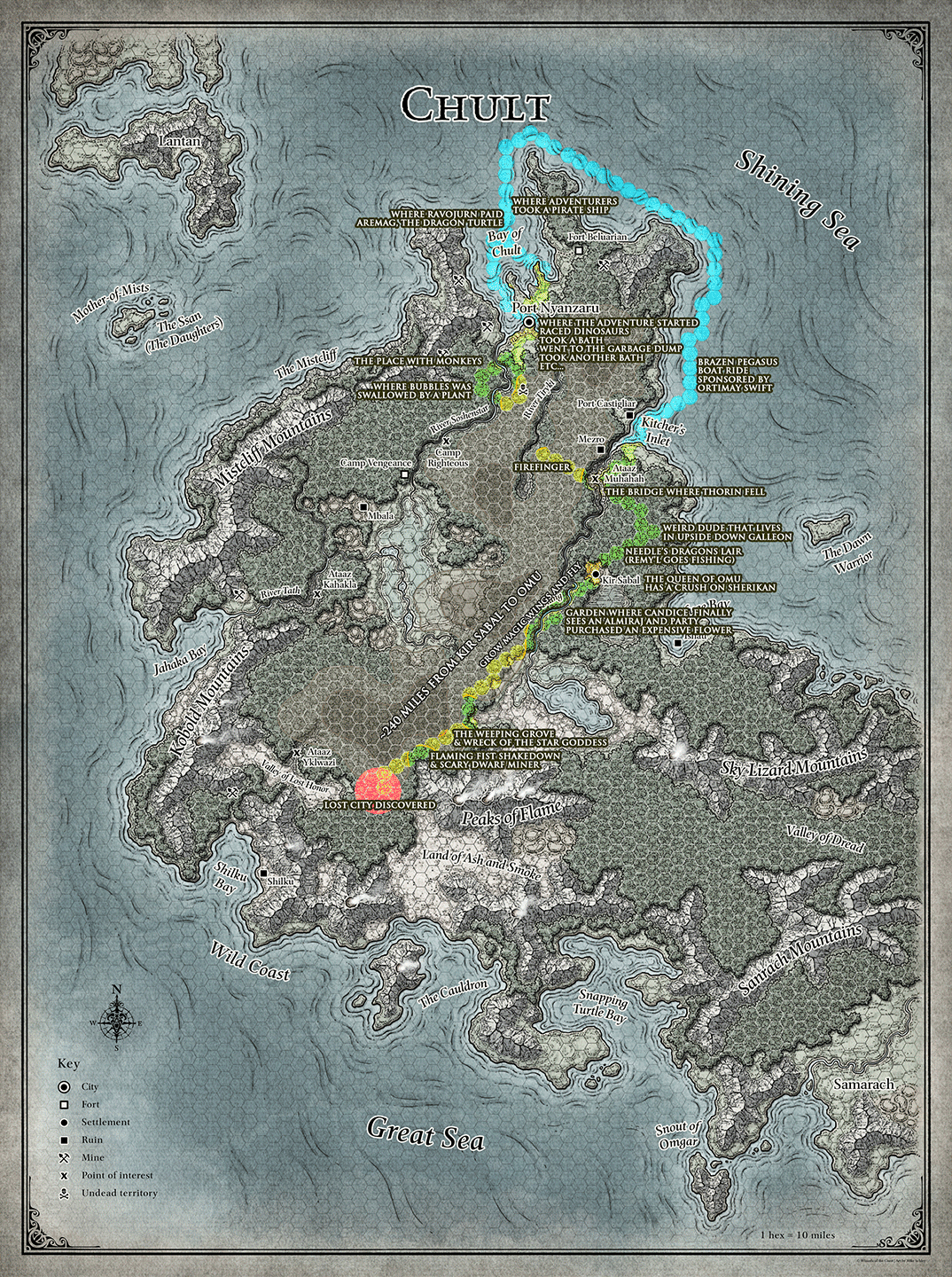 An angry Lich, Acererak, atacks the group after they ruined his experiment. Biff falls into the lava. The adventurers leave Acererak after convincing him that the 1-handed Red Wizard would make a good replacement for Withers. The group escapes the tomb. Bag of Nails takes a shot at Cloudrunner and misses horribly. He laughs, and invites the group over for dinner. Eventually, our adventures return to Port Nyanzaru as heroes and are rewarded.

11/17/18 TOA CH5
Traversing round rooms, the group  finds a Golden Mastodon, they regroup with some red wizards and choose another route. They battle a squad of modron, and a strange flying vehicle.  Pushing onward, they find 3 weird “dolls”;  Emme becomes enchanted and wants to go out in a blaze of glory.

11/3/18 TOA CH5,
On level 5 withers attacks for a third time. Adventurers make it down to cogs and battle 5 wardrobes.

10/20/18 TOA CH5,
More puzzles and down to level 4, We meet Biff Longsteel; A suspicious lizard is seen scurrying around, Biff convinces Bubbles to destroy it.

10/13/18 TOA CH5,
Down to level 3, Mist finds Yaka –  a loud, obnoxious floating, talking golden skull that can teleport and never wants to leave his side. Also purple mold with tiny eyes watches the party as they travel through the tomb.

9/29/18 TOA CH5
An annoyed Withers introduces himself and attempts to eradicate the adventurers from his dungeon. He also brings along some undead soldiers and an invisible monster to attack the adventurers.

9/8/18 ToA CH3
The Group underestimates the red wizards and fails. We lose Mossback and Candice in a barrage of fireballs; Some are captured, and others manage to escape;

9/1/18 ToA CH3:
Group continues exploring Omu and saves Orvex who is buried in rubble. He guides them through Omu and toward a temple. He dies while trying to help recover a puzzle cube.

8/25/18 ToA CH3:  Adventures battle Gargoyles and climb down the cliffs and land in amphitheater; They encounter Hooded Lantern who is hunting the King of Feathers; Later they start exploring Omu and recover their first puzzle cube.

T-Rex puking zombies and We Delved too Far

8/4/18 ToA Ch2 and DDCH-TOA12
Found a crate of bug spray inside a zombie T-Rex; Later in the day, a Flaming Fist Patrol shook the party down for gold because they didn’t have a “Charter to Explore Chult”. They were looking for renegade miners; Next day, we find an albino dwarf who’s friends are trapped in a mine, we go to help but fall into a trap – the dwarf is really a monster that wants to kill us!

The Weeping Grove and Wreck of the Star Goddess

7/28/18 DDCH-TOA12  and ToA CH2:
On the way to Omu by foot… Monkeys appear in the morning and are scared off. Adventurers continue and come across a magical willow grove. Willow protectors need help fighting off zombies with blue triangles tattooed on their foreheads. The party finds a wrecked airship with some survivors. Zombies lurk below and in the trees. Tyr scares off zombies and party members, but eventually they destroy all the zombies.

7/14/18 ToA CH2:
Sherikan, Ravojurn and Kandice are declared “Generals” by Queen Mwaxnare. Mossback uses an awesome spell to pinpoint the orchid. Adventures battle plants and buy an orchid from a woman in a feather dress. They return to Asharra with orchid.

Wreck of the Narwaal, Needles Bones and Ribbit Run

7/7/18 ToA CH2:; DDHC-TOA12:
Adventurers travel toward Kir Sabaal (Nephy’s home), find a human named Bwayes and trade some goods for potions of healing. They find poems from Gondolo and fight off a froghemoth. They find the lost treasure from a dead dragon.

6/23/18 TOA CH2:
Led by Azaka, the party ascends an ancient signal tower called “Firefinger”. Under the cover of night they ambush the Pterrafolk and recover Azaka’s mask. They rescue an aarakocra named Nephyr who has some information about Chult.

6/16/18 TOA CH2
Adventurers meet with Merchant Prince Syndra Silvane and are asked to end the death curse. The Lost City of Omu is believed to be the source. Adventurers choose Azaka as their guide and agree that if they recover her family heirloom, she will help them find the lost city of Omu. In the jungle, they cross an ancient stone bridge. A stone golem pushes Thorin off the bridge to his death. Everyone else escapes.They meet a tortle named Mossback.

6/2/18 ToA CH2:
The Party takes on the pirates aboard the Dragonfire. They agree with Rajojurn’s idea (the barbarian) and sail directly toward the pirate ship. They encounter Aremag a toll collecting Dragon Turtle and Ravojurn quickly throws/pays all his 387 gold overboard. During the pirate siege, Bubbles casts fireball and turns the tide. The pirate captain was killed (Eye of the Deep). Gareth Bale was thunderwaved off the ship and never seen again.

DDCH-TOA5 (ToA CH2: Port Nyanzaru)
5/26/18: Plague Boat – Following the lead of a captured pirate (Gareth Bale), the group sails to a tiny island where pirates store and trade goods. The adventures are attacked as they attempt to dock. They quickly overpower the pirates and get them to surrender. Kandice brings Elok back to Port Nyanzaru as the remaining group decides to track down the ship, Dragon Fang. A vampire bride is found in crate number seven. A stone tablet mentions Valindra Shadowmantle of the Red Wizards, and information about the location of Omu from the Blood King.

DDCH-TOA5 (ToA CH2: Port Nyanzaru)
5/19/18 Plague Boat and Crate #7; The group starts an investigation and getting more information on the pirate attacks. Inquirying merchants, dock workers, in and out of the city, they are eventually lead to Tirikyi Anchorage (a part of town where black market items typically enter). The party gets news of a recent boat in “Quarantine” which leads them to a warehouse of undocumented trade goods.

DDCH-TOA5: (ToA CH1: Port Nyanzaru) Spa Day and Snuffed out;
5/12/18  Sherikan is the target of mysterious attacks. A Potted plant falls on him, and he is framed at the bathhouse – invoking a curse against thieves. Ravojurn overhears “The Black Dog sleeps outside because it has fleas. Delonda says crate 7 is where the treasure is.” Later at night, Pirates attempt to turn the lights out at the Nyanzaru lighthouse.

4/28/01 DDCH-TOA5: Encounters @ Port Nyanzaru: ToA CH1: Port Nyanzaru
After returning to Port Nyanzaru, the adventures relax at the well-known bathhouse. Ruby uses her elemental gem and we have a water elemental dual in the pool.  Pock Marked Po summons the adventurers to find missing children at the Refuse Pit. Strange voices promise, candy, toys and more… Unfortunately, a half orc was eaten by the garbage beast.

4/21/01 DDCH-TOA12: Encounters in the Jungle of Chult
The Treasure hunting party attempts to return home with some treasure. They upset some Chwingas and more monkeys. Heroes also come across an abandoned hut owned by Tawnya, a druid. They battle a large, white, 4-armed gorilla and 2 allosaurus.

Monkey See Monkey Do and Beacon of the Spirit

4/14/01 DDCH-TOA12 Encounters in the Jungle of Chult
Directed by Pock Marked Po, adventurers are given “guides” Faroule and Gondolo, and told to recover a treasure in the jungle. First they find a stone obelisk with monkey carvings. Later in the day they find a temple with monkeys…

The Jungle Has Fangs (part 3)

3/31/18 DDAL07-05:
Found lost city, Wadamu dies and our sorcerer, Bubbles, almost gets eaten by a plant. Adventurers find a trapped staircase and escape hordes of zombies. Within the underground chamber there is a waterfall and a strange yuan ti woman. Kandice strikes her down on a crit. Adventurers scramble out of chamber as everything around them collapses.

The Jungle Has Fangs (part 2)

3/24/18 DDAL07-04
Escorted by Grung named Wadamu, the party takes out a gang of yuan-ti who are forcing villagers to manufacture drugs. At the end, more clues lead to a lost city in the jungle.

The Jungle Has Fangs (part 1)

3/17/18 DDAL07-03
Another Dinosaur Race named the “Na’Nabuso Haka” – a 4 part relay and at the finish line zombie dinos attack a young girl. Our heroes recover a satchel with Wander Lost drugs and the city guard arrive at the end.

Grand Prize of the Oracle

3/10/18 City on the Edge DDAL07-01
Party meets with Soggy Wren who wants to have Dreamers Amulet investigated and destroyed. Yuan-Ti Spies attempt to win it back; Barbarian rushes into backroom and things get a little dicey.

Grand Prize of the Oracle & When Death Calls

2/24/18 City on the Edge DDAL07-01
Explored under ziggurats in old city for a missing person. Found zombies and a strange shrine dedicated to Yuan-Ti. Found more amulet pieces.

City on the Edge

2/17/18 DDAL07-01
Our adventure begins with the party arriving at Port Nyanzaru’s Harbor District. Everyone has the death curse, and you are here to help end it. Upon arrival, you travel to the southernmost section of Old City, seeking someone named Pock-Marked Po. Po needs you to enter a Dinosaur race and cage battle. More clues lead to Malars Throat and you find grung infected by something strange.