When making a melee weapon attack, a creature that doesn’t have a swimming speed (either natural or granted by magic) has disadvantage on the attack roll unless the weapon is a dagger, javelin, shortsword, spear, or trident.

A ranged weapon attack automatically misses a target beyond the weapon’s normal range. Even against a target within normal range, the attack roll has disadvantage unless the weapon is a crossbow, a net, or a weapon that is thrown like a javelin (including a spear, trident, or dart).

Creatures and objects that are fully immersed in water have resistance to fire damage.

While climbing or swimming, each foot of movement costs 1 extra foot (2 extra feet in difficult terrain), unless a creature has a climbing or swimming speed.  Additional water terrain features, such as currents, waves, a whirlpool, etc. could make swimming more difficult and may effect speed, and may require swim (athletics checks) – DM Discretion.

You can hold your breath for a number of minutes equal to 1 + your Con modifier, as soon as that timer runs out (or if you’re choking/being choked) you have a number of rounds equal to 1 + your Con modifier (minimum of one round), and once that runs out you are Suffocating, which is not where you want to be. According to the PHB, this means you immediately drop to 0 hit points (regardless of your previous total or any resistances/immunities) and you’re dying. You can’t regain hp or be stabilized until you can breathe. It’s rough folks.

Spells with Somatic and Material components, sure, no problem, but most spells have a verbal component. Short answer: yes. Long answer: yes, but if you’re talking a lot you’re not holding your breath and that’s something to be careful about, depending on the DM at your table.

You can cast a single spell underwater, but afterwards you begin drowning if you can’t breathe underwater. Otherwise, no rule prevents verbal components from working underwater.

And in this case, it is Con mod rounds only, (without the +1). The +1 only happens when you’ve held your breath and have Con mod + 1 minutes before you start drowning. So if you had a zero or less on Con mod, and cast a spell, you suffocate at the start of your next turn. 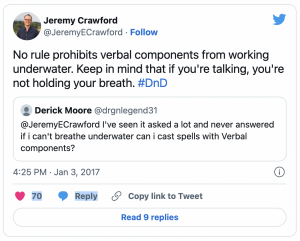 A creature can hold its breath for a number of minutes equal to 1 + its Constitution modifier (minimum of 30 seconds).

When a creature runs out of breath or is choking, it can survive for a number of rounds equal to its Constitution modifier (minimum of 1 round). At the start of its next turn, it drops to 0 Hit Points and is dying, and it can’t regain Hit Points or be stabilized until it can breathe again.

For example, a creature with a Constitution of 14 can hold its breath for 3 minutes. If it starts suffocating, it has 2 rounds to reach air before it drops to 0 Hit Points.

In combat, holding your breath underwater is much more difficult. Creatures are not only swimming, but dodging, striking, taking damage, etc. As such, the rules for holding your breath in combat notably reduce the time creatures can hold their breath compared to what I call “Underwater Exploration Rules.” (For those rules, I use the guidelines in the DMG.) Unless directly contradicted, regular rules from the PHB and DMG apply as normal.

These rules apply to any creature that does not have the ability to breathe underwater.

Just before a creature is submerged underwater, they take a Breath of air which provides them with enough air to last a number of rounds equal to 3 + their Con mod (minimum of 3). Each creature, at the end of their turn, reduces their remaining Breath by 1. If a creature is swimming within 5 ft. of the surface of the water, it can be assumed the creature is able to take a breath freely upon its turn. Any rounds spent this way do not count against the rounds holding their Breath, as they can reset their Breath to full.

There are two primary ways creatures lose Breath while in combat: casting spells with verbal components, and taking damage. DMs are welcome to rule that other activities or hazards can threaten loss of breath as well.

When a creature takes damage while underwater, it is difficult not to expel some Breath in reaction, either in exertion or in grunts and gasps of pain. When a creature takes damage while holding its breath, it makes a Con save with a DC as if it were concentrating on a spell (DC 10 or half the damage taken, whichever is higher.) On a success, the creature loses no Breath. On a failure, the creature reduces their Breath by 1. Creatures concentrating on spells must also make Concentration saves separately, as normal.

Running out of Breath

If a creature begins its turn underwater while at 0 Breath, it is at risk of beginning to drown. The creature must make a DC 12 Con save. On a success, the creature endures the lack of Breath and may act normally. On future turns, the creature will continue to make Con saves (increasing the DC by 2 after each success) until they fail or regain Breath. On a failure, the creature begins to drown. They immediately fall unconscious, drop to 0 hit points, and are now dying. They must make Death Saving Throws as normal, and cannot stabilize until they are no longer drowning.

A creature that is unconscious and drowning may recieve healing as normal. However, they do not regain any Breath upon being healed. On future turns they must resume making Con saves as normal at whatever DC they had reached before they failed.

Grappling underwater follows regular rules, however there is an additional option available to creatures. When taking the Attack action while grappling a creature, a creature may, in place of one of its attack, attempt to crush some of the Breath out of their target. Make an opposed Athletics check. If the attacker succeeds, the target creature loses 1 Breath.