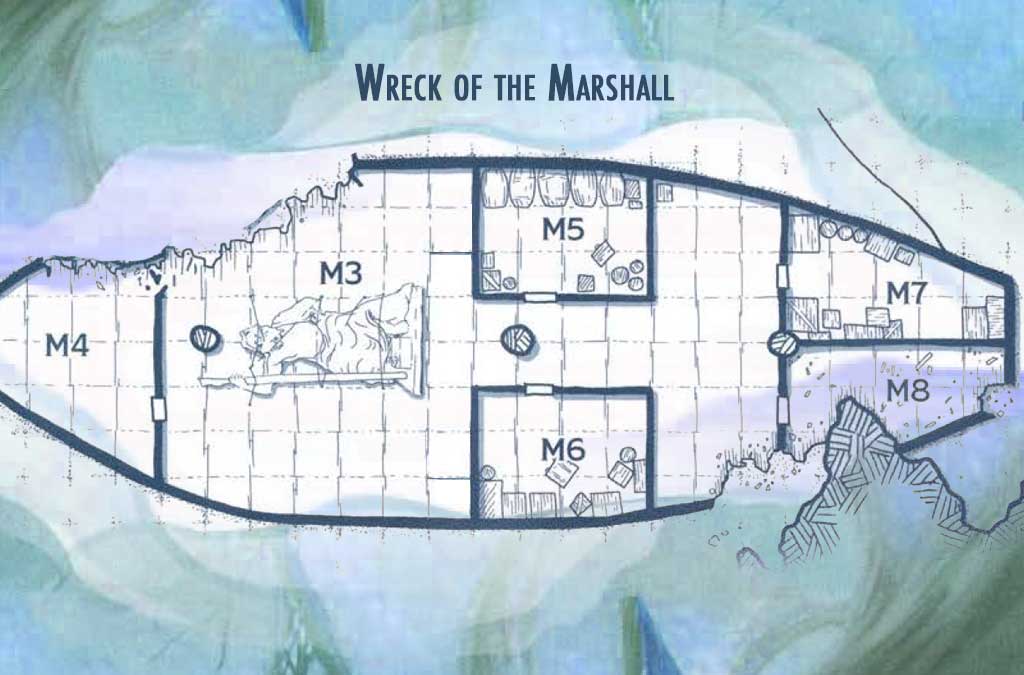 Adventures are hired by Eliander Fireborn, Saltmarsh captain of the guard, to recover or destroy a cursed ceremonial dagger.

The party arrives at the site of the wreck of the Marshal. Three years ago the crusading ship for St. Cuthbert departed Saltmarsh. It crashed along the shore, 4 hours away from town.

Adventures are lured into the ocean by harpies flying above a rocky beach. Kelda is uneffected and wildshapes into a giant crab.  Sar-Gassum rushes forward and makes it to the harpy’s nest before tumbling down a large rock. Soon the the party manages to shake the effects of the harpy’s song and they continue toward the shipwreck. The harpys fall back after their attempts to lure souls fails.

Five feet below the surface of the crashing waves the Marshall sits wedged between 2 large rocks. In the cargo hold, they find a large statue dedicated to Saint Cuthbert. Jamie casts detect magic and for some reason the statue radiates enchantment and necromantic energy. Someone continues to hum Rock Lobster underwater behind one of the doors in the cargo hold.

Sar-Gassum and Snaps start breaking the chains to the statue, specters attack! Most of the party suffers from their life draining attacks and the specters are destroyed. Guy opens the door from which a voice is heard, there is a giant talking crab named Barnacle Bess, or “Barney” for short.

Barney says she can help find the dagger, but wants the help of the adventurers first…