We continue with Revned, Lumina, MiraJane, Wulfgar seeking food and shelter inside an ancient pyramid. While the group is slaughtering fire beatles,  Lithos climbs down from above. Moments later a mysterious woman wearing a bronze mask and green tunic drops in through a secret door. The mysterious woman claims she can help, but we must first prove our worthiness by passing a challenge of bravery.

Titania:
You move onward to the Capital City of Ylaraum on board Blitz – Kevgold Smilesbeard’s dune lizard. Blitz rests about 5-6 hours in the heat of day, then travels at a very quick rate in the cool of night. Kevgold doesn’t talk as much anymore – knowing the trauma and grief you might be experiencing. Kevgold does seem concerned with the mummy rot on your face – saying “Don’t worry Titania, we’ll get you some help soon”.

Ninharma:
Two humans pulled you up away and from a herd of ash worms. One is a slim, wiry man – wearing stylish clothes over the top of leather armor. He has dark-hair,  a pencil-thin mustache and a neatly pointed beard (he looks like a professional fencer). The attractive female with blonde hair, blue eyes wears stylish robes – you actually recognize from the Keep’s debate contest!  Sand pours and flows off you as you find yourself zipping above the sand dunes on a flying carpet! Suddenly the wind blows the hood off your head – revealing your face! For a brief moment the two humans are shocked; perhaps paralyzed with amazement. Then, they both turn away from you, smiling at each other in agreement, and say “please have a seat, rest your weary feet.”

Everyone else:
Will pick-up right where we left off inside or outside (Lithos) the top of a step pyramid.

The ghosts of Scooter, Fhamoril and Jamwar roam the foothills of the Altan Tepes… 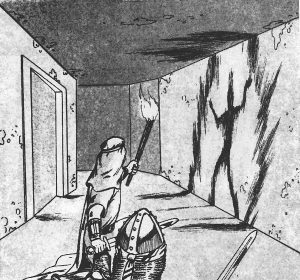 Wulfgar, crawls up a ladder and finds some mysterious levers and a tube. He yells out “Boobs” before joining the group below.

Strange glowing fire beatles scurry about the floor. They seem harmless until one tries to bite Lumina. The beatles are destroyed and a few collect some gooey glowing glands.  Lithos, finds the group.

Cali, a Warrior Maiden of Madurua drops in from above and promises food and shelter to those who can pass a test. She leads the group further down into the pyramid, and stops at a secret door. She announces that this is the beginning of the challenge. She informs Wulfgar that he is wearing the mask wrong and that it is from the Brotherhood of Gorm.

Into the next room,  Lumina and Revned trigger a deadly trap of swinging blades. Lumina navigates across, but Revned stops. Mira Jane clears the blades easily with her cat-like reflexes. The rest of the group searches for a method to deactivate the trap – not willing to risk a deadly hit.

In frustration, Wulfgar decides to go for it and is nicked twice but the blades. Finally, Lumina decides to crawl forward under a large slab of stone and pops up on the other side where there is a lever that resets the swinging blade trap. The rest of the group manages to navigate across.

After exhaustively searching a “fake” treasure tomb, Lithos, Wulfgar and Lumina discover a hidden passage behind a thin wall. Wulfgar and Lumina eventually bust a hole through and the group discovers the tomb of the Queen. Not wanting to disturb the tomb, Revned uses here magic wand to detect a rough  metal object inside. Cali, announces that this is not what we are looking for so the group turns back.

Again, another section of wall is torn down – revealing a secret passage to the kings tomb. The group enters, but is attacked by a screaming banshee. Revned and Lithos immediately flee. The others discover that their normal weapons have no effect and also flee.  The group devises a plan to send Wulfgar back in – to use the magic wand and see if the tomb has the artifact that Cali requires. With his hair stuck into his ears, Wulfgar re-enters the chamber and fumbles activating the magic wand.  On his second try he detects 2 large objects and quickly exits to tell the group.

Now, the group know that this must be the right area, they send in the 3 strongest (Wulfgar, Lumina and Cali) to retrieve the unknown objects. Wulfgar and Cali work on opening the stone box, inside is a king with a glorious crown, ornate plate-mail and a silver sword. Lumina destroys the banshee with the magic sword as Wulfgar and Cali recover the armor.

With Cali’s mission complete, she brings the group before the Maidens of Madurua. Revned and Lumina accept the offer to join. A sickle symbol is branded on the inside left wrist and a pledge taken. Cali now leads the group to  Madurua’s stronghold within the underground city of Cyndicea.

Lithos secretly removed the king’s crown and  managed to escape with it when Revned teleported part of the group to Barovia.