Cali convinces her new maiden sisters to stay and help defeat Zargon! Wulfgar and Lithos reluctantly tag along… Back into the Pyramid, the group enters the lower levels and presumed home of Zargon. Cyndiceans dressed as rats, Wood Golems, and a Hellhound are encountered during the first few hours… 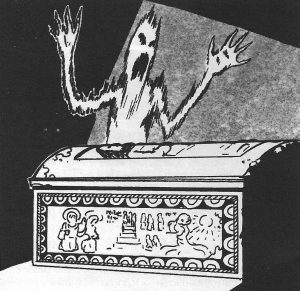 After Revned and Lumina are cured of mummy rot, some members are now considering leaving the lost underground city – to continue their original journey to Ylaraum. There is still hope that they will be reunited with their comrades, Titania and Ninharma.

Scouts from Madarua report that 3 members of Gorm were found dead in the pyramid above – the same pyramid that leads to the outside world. Some fear that Zargon has expanded his control into the upper regions of the pyramid.  Scouts have also noted an increase in goblin activity along the edges of the city.

Meanwhile, Cali tries to convince her new comrades to stay and help defeat Zargon. After recovering the magical armor and sword, the maidens believe that Cali can destroy Zargon – and lead the Maidens of Madarua to glory and restore order to Cyndicea.

Cali leads the group through the tunnel and back into the pyramid. Cali then leads the group into the unexplored regions of the pyramid – toward the believed home of Zargon. In the first chamber, the group has an awkward greeting with 4 Cyndiceans dressed as rats. The group is allowed to proceed down a staircase…

Lithos leads the way! With great strength, Lithos prys open a series of doors in the lower temple halls.  After peering down a long dark hallway, the group changed their mind and backtrack – taking a route more frequently traveled (following the tracks of goblins and the priests of Zargon).

In a dark room ahead, 2 small wooden, halfling size statues stand in the middle of the room. Lumina and Cali try moving a statue when suddenly, it comes to life and attacks! One is pushed down a trapdoor in the floor, while the other is destroyed with fire.

Proceeding down the trapdoor, Cali and Lumina find that the halfling statue was destroyed and smoke emits from its remains. They encounter a fire breathing dog – and destroy it. Thousands of copper pieces cover the floor and 3 doors fill the room.

The group Continues down the ladder and find themselves in a room painted a bright yellow-orange. The group follows more tracks, which leads them down a hallway and toward a door where Revned hears the familiar sounds of goblins – lots of them!